Well, it's that time of year again, when I get out my copy of Max Lucado's book-
"A Gentle Thunder" and re-read chapter 9: "What to do with Birthdays?" Even though my theology of the body and spirit as separate and divisible entities is changing from a Neo-platonic one to a more Orthodox Christian one- I still found that re-reading this chapter on the anniversary of the day of my birth was rewarding.

Perhaps you will find it so, as well. Here it is, read and enjoy. I've found the book is a great gift for people for their birthday (especially the fortieth).

From "A Gentle Thunder, Hearing God through the Storm"
by Max Lucado.
What to Do with Birthdays: The God of Grave Victory

The comments began a couple of months ago. “Getting close to the top there, Max? Be careful. You pick up speed going downhill."

"Almost there, eh, Max? Won't be long before you'll stop combing your hair and start arranging it."

Thirty days out, the word started to spread (so did my waist).

Reminders became more frequent. "Look at it this way. All your life you've been taught to respect your elders. Now you don't have to respect anyone."

This week phone calls started to arrive.
“I don't know whether to send condolences or congratulations."

"Able to make it out of bed this morning?" my brother asked today.

It's the big one. The fortieth. In defiance of age, I stepped onto the dark streets and ran. I wanted to see what a forty-year old jogger feels like. Know what I learned? He feels like a thirty-nine year old jogger.

But even though I feel the same as I did yesterday, my driver's license reminds me I am forty. They say life begins at forty. But so do bad eyesight, arthritis, and the habit of telling the same joke three times to the same person. Lucille Ball said the secret of staying young is to live honestly, eat slowly, and lie about your age.
Easier said than done. It’s hard to lie about the obvious. When you are young you make a lot of faces in the mirror. When you are old, the mirror gets even. But I tell myself that turning forty isn't too bad; next to a Galapagos turtle I'm still a child.

I've gotten several laughs out of the comments that have come my way. Thought you might enjoy a few:
"You know you are getting older when you try to straighten out the wrinkles in your socks only to find you aren't wearing any."
"At twenty we don't care what the worlds thinks of us; at thirty we start to worry about what the world thinks of us; at forty we realize the world isn't thinking of us at all."
"I've gotten to the age where I need my false teeth and hearing aid before I can ask where I left my glasses."
"Forty is when you stop patting yourself on the back and start patting yourself under the chin."

I'll leave it for Dave Barry to sum it up:

As a person starts reaching this milestone (your fortieth birthday) you need to take time to learn about the biological changes that are taking place within your body, so that you will be better able to understand and cope with the inevitable and completely natural elements of the aging process- the minor aches, pains, dental problems, intestinal malfunctions, muscle deterioration, emotional instability, memory lapses, hearing and vision loss, impotence, seizure growths, prostrate problems, greatly reduced limb function, massive coronary failure, death and, of course, painful hemorrhoid swelling- that can make up this exciting adventure we call "middle age."

Growing older. Aging. We laugh about it, and we groan about it. We resist it, but we can't stop it. And with the chuckles and wrinkles come some serious thoughts and questions about what happens when we die. Is death when we go to sleep? Or is death when we finally wake up?

They want to hear what God says about death.

They want to hear how God would answer their questions about life hereafter. They don't want my opinion; nor do they want the thoughts of a philosopher or the research of a scientist. They want to know what God says. If Jesus were here, at the head of this casket, in the middle of this cemetery, what would he say?

And so under the canopy of sorrow, I give God's words. I share the eulogy Jesus gave for himself. The disciples did not know it was his farewell address. No one did, but it was. He knew he had just witnessed his final sunset. He knew death would come with the morning. So he spoke about death. Here is how he began.

"Don't let your hearts be troubled. Trust in God, and trust in me.
There are many rooms in my Father's house;
I would not tell you this if it were not true.
I am going there to prepare a place for you.
After I go and prepare a place for you,
I will come back and take you to be with me so that you may be where I am"
(John 14:1-4).

What kind of statement is that? Trust me with your death. When you face the tomb, don't be troubled- trust me! You get the impression that to God the grave is a no-brainer. He speaks as casually as the mechanic who says to a worried client, "Sure, the engine needs an overhaul, but don't worry. I can do it." For us it's an ordeal. For him it's no big deal.

The other night I did something that every parent has done a dozen times. I carried my daughter to bed. Five-year old Sara fell asleep on the floor, and I picked her up, carried her up the stairs, and put her in bed. Why? I knew it was time for her to rest, and I knew that rest was better up there than down here.

Doesn't God do the same? Doesn't he, knowing more than we, carry us to the place of rest he created? For God, death is no tragedy. In God's economy, the termination of the body is the beginning of life.

Can you imagine if Sara's sisters objected to my decision to carry her upstairs? "Don't take her. We'll miss her. Please keep her here so we will all be together.

"How would I answer? "Oh, but she'll rest so much better in the room I have prepared for her. Besides, you'll be coming up yourselves soon."

By calling us home, God is doing what any father would do. He is providing a better place to rest. A place he has "prepared for us." Heaven is not mass-produced; it is tailor-made.

Sometime ago I indulged and ordered two shirts from a tailor. I selected the cloth. The tailor measured my body. And several weeks later, I received two shirts made especially for me. There is a big difference between these two shirts and the others shirts in my closet. The tailored shirts were made with me in mind. The other shirts were made for any hundred thousand or so males my size. But not these two. They were made just for me.

As a result, they fit! They don't bulge. They don't choke. They are just right. Such is the promise of heaven. It was made with us in mind. Elsewhere Jesus invites us to "receive the kingdom God has prepared for you since the world was made" (Matthew 25:34).

By the way, I've often thought it curious how few people Jesus raised from the dead. He healed hundreds and fed thousands, but as far as we know he only raised three: the daughter of Jairus, the boy near Nain, and Lazarus. Why so few? Could it be because he knew he'd be doing them favors? Could it be because he couldn't get any volunteers? Could it be that once someone is there, the last place they want to return is here?

We must trust God. We must trust not only that he does what is best but knows what is ahead. Ponder these words of Isaiah 57:1-2 "The good men perish: the ungodly die before their time and no one seems to care or wonder why. No one seems to realize that God is taking them away from the evil days ahead. For the godly who die shall rest in peace" (TLB).

My, what a thought. God is taking them away from the evil days ahead. Could death be God's grace? Could the funeral wreath be God's safety ring? Why does an eight-year old die of cancer? Why is a young mother taken from her children? As horrible as the grave may be, could it be God's protection from the future?

Trust in God, Jesus urges, and trust in me.

Several years ago I heard then Vice President George Bush speak at a prayer breakfast. He told of his trip to Russia to represent the United States at the funeral of Leonid Brezhnev. The funeral was as precise and stoic as the communist regime. No tears were seen, and no emotion displayed. With one exception. My Bush told how Brezhnev's widow was the last person to witness the body before the coffin closed. For several seconds she stood at his side and then reached down and performed the sign of the cross on her husband's chest.

In the hour of her husband's death, she went not to Lenin, not to Karl Marx, not to Khrushchev. In the hour of death she turned to a Nazarene carpenter who had lived two thousand years ago and who dared to claim: "Don't let your hearts be troubled. Trust in God, and trust in me."

So what do we do with birthdays? As much as we'd like to avoid them, we can't. Pretty soon the candles cost as much as the cake. And as much as we'd like to think we are exempt from the grave, we aren't. So rather than avoid them, welcome them! Welcome them as mile-markers that remind you that you aren't home yet, but you're closer than you've ever been.
Posted by Tracy Dickerson at 10:15 AM No comments:
Email ThisBlogThis!Share to TwitterShare to FacebookShare to Pinterest
Labels: birthdays; max lucado; a gentle thunder; what to do with birthdays
Newer Posts Older Posts Home
Subscribe to: Posts (Atom) 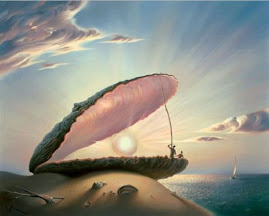